NEW YORK – The Government of Quebec, Ingka Group (IKEA), City of Madison and several other industry and organization innovators have pledged to join CALSTART’s Global Commercial Vehicle Drive to Zero (Drive to Zero) program. The announcement was made at Drive to Zero’s Climate Week NYC workshop where transportation industry and government innovators are highlighting current and building new global actions and partnerships aimed at cutting climate emissions from trucks, buses and other large vehicles. 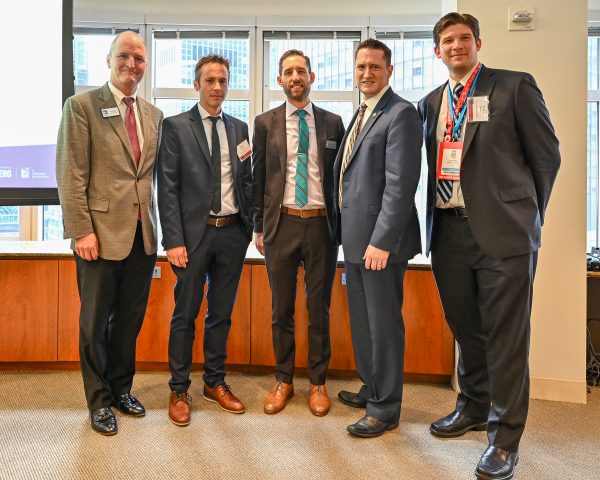 The Government of Quebec endorses the Drive to Zero pledge. Benoit Charette, Minister of the Environment and the Fight Against Climate Change, second from right.

“By joining the Drive to Zero pledge, Québec is committing to share its transportation electrification knowledge and expertise and coordinate its efforts with those of all partners to make zero-emission technology commercially viable by 2025 in the heavy vehicle sector and to ensure that global sales of these vehicles dominate by 2040,” said Benoit Charette, Quebec Minister of the Environment and the Fight against Climate Change. 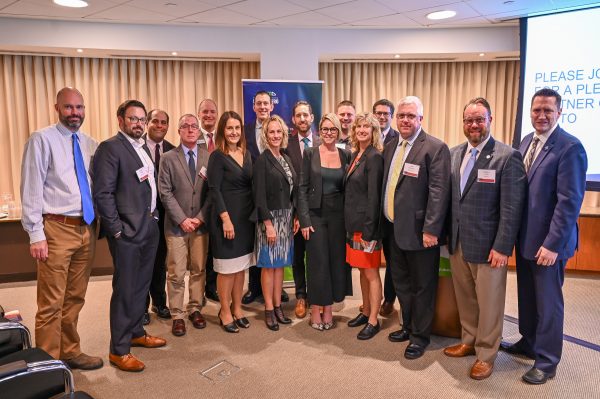 Drive to Zero is a strategic international initiative designed to catalyze the growth of the zero-emission (ZE) and near-zero-emission (NZ) MHDV sector, which includes everything from transit buses to eighteen wheelers to box trucks to school buses. The program’s goal is to drive market viability for near- and zero-emission vehicles in the MHDV sector in key urban communities by 2025 and achieve full market penetration by 2040. It is built upon a technology strategy, called the beachhead strategy, that identifies the commercial vehicle market segments where ZE and NZ technology is likely to succeed first. 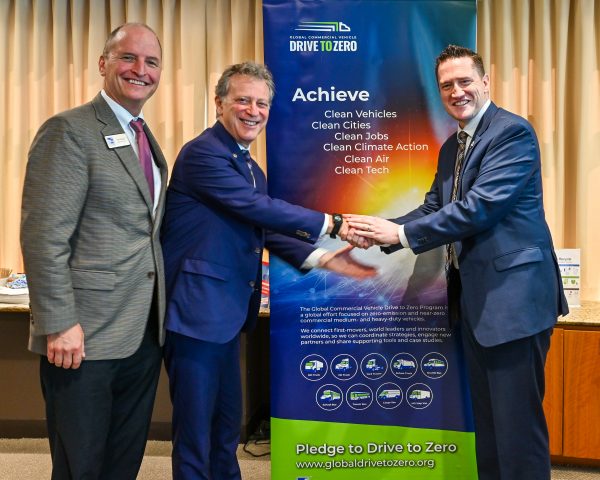 CALSTART organized today’s Climate Week NYC workshop in partnership with the City of New York and Government of Quebec in recognition of their governments’ commitments to cutting emissions in this critical sector.

“Quebec is currently developing an Electrification and Climate Change Plan to support our government’s commitment to reduce its GHG emissions by 37.5 percent below 1990 levels by the year 2030. We recognize the truck and bus sector plays a critical role in our success and we are now looking at ways to support local leaders in that sector, infrastructure and the public so we can accelerate the adoption of zero-emission vehicles in Quebec and throughout North America,” said Minister Charette.

“NYC Fleet operates one of the nation’s largest alternative fuel fleets, with over 2,000 plug-in vehicles and 19,000 fleet units using some type of alternative, cleaner fuel,” says New York City Chief Fleet Officer Keith Kerman with the Department of Citywide Administrative Services. “We are excited to host this forum with CALSTART as we work together to advance the fleet industry and bring more zero-emission vehicles and trucks into use.” 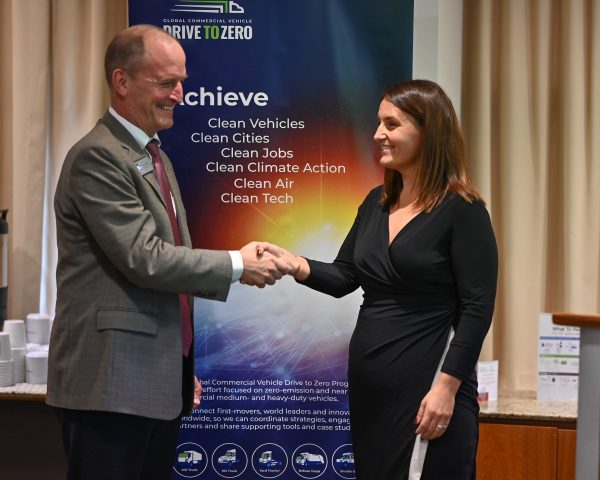 CALSTART CEO and President John Boesel thanks Ingka Group’s (IKEA) Angela Hultberg for taking the pledge to Drive to Zero.

“Transport is the fastest growing emissions sector. Ingka (formerly IKEA Group) wants to lead change and go 100 percent zero emissions for last mile deliveries by the year 2025. We are confident we can achieve this through collaboration and new ways of working. The technology is good enough to get started, and that is what we are doing. The time for action is now. With EVs already deployed in 13 markets we are excited to learn and work to make the current solutions even better,” said Angela Hultberg, Head of Sustainable Mobility for IKEA Group.”

Today’s Drive to Zero Climate Week NYC workshop explored how to grow, accelerate and create an action plan for ZE and NZ MHDV adoption in the Northeastern United States and Eastern Canada.

“The US Northeast and Eastern Canada have a history of strong climate and clean energy goals and of working collaboratively to cut emissions from the electricity and transportation sector through efforts like the Regional Greenhouse Gas Initiative, Transportation Climate Initiative, and local efforts. These regions are uniquely positioned to drive the development of a cleaner, more advanced medium- and heavy-duty vehicle sector,” said Boesel.

In advance of today’s event and as a part of the United Nations Secretary-General Climate Action Summit, CALSTART and 100 global organizations committed this week to drastically cut emissions from transport through a collaborative effort, Action towards Climate-friendly Transport (ACT).  The coalition will connect innovative approaches to decarbonization with long-term planning, electric vehicle deployment, private sector engagement and growing the market for ZE freight vehicles. As a core partner within the ACT coalition, CALSTART, the Transport Decarbonisation Alliance (TDA), and EV100 will work collaboratively to increase global demand for ZE freight vehicles through commitments made by governments, cities and private companies.

“In our engagement with global partners, we are showing that the early successes for adoption – transit bus and delivery trucks – help to grow the market and supply chain for successive phases of additional vehicle segments where the technology can flourish next,” said Bill Van Amburg, Executive Vice President of CALSTART.

As a sign of the accelerating global commitment to transforming commercial vehicles, Van Amburg is today representing Drive to Zero on the other side of the continent in Vancouver, Canada in support of partner, C40 Cities.

A network of more than 90 of the world’s megacities committed to addressing climate change, C40 cities is hosting its Zero-emission Freight (ZEF) Academy in Vancouver. Leading cities and experts will inform cities’ transition to ZEF and commercial vehicles and support the implementation of zero-emission areas (ZEAs) where only zero-emission vehicles are allowed to operate. CALSTART’s Drive to Zero program strategy is providing the underlying blueprint to help cities focus on first-success markets, such as urban delivery vehicles, and build supporting ecosystems of policies, incentives, infrastructure and pilot projects.

Drive to Zero is developing tools, identifying best practices, eliminating barriers, and coordinating among stakeholders to ensure the success of beachhead markets and technologies. Today’s Drive to Zero invitation-only workshop at Latham & Watkins, LLP in New York City is an official event of Climate Week NYC, the biggest Climate Week event in the world. Run in coordination with the United Nations (UN) and the City of New York, this year Climate Week runs in parallel with the UN Secretary-General’s Climate Action Summit.

A national nonprofit consortium with offices in New York, Michigan, Colorado and California, CALSTART partners with 210+ member company and agency innovators to build a prosperous, efficient and clean high-tech transportation industry. We knock out barriers to modernization and the adoption of clean vehicles. CALSTART is changing transportation for good.