As key global markets chart a course for a transportation and logistics sector that is increasingly powered by advanced zero-emission technologies, infrastructure will be a costly and complicated challenge, but also a critical opportunity.

So far, the development of infrastructure in the United States has largely kept up with the demands of the technology on the market. Most of the clean vehicle technologies now on the market involve low power or fuel requirements (light-duty cars) or return to their depots daily where they can recharge or refuel (bus and delivery truck). Consequently, zero-emission cars, buses, and medium-duty delivery trucks are becoming much more common sights on roads:  Tesla just built its one millionth vehicle, leading cities (such as NYC and LA) are transitioning their entire transit fleets to zero-emissions, and major logistics companies are trying out light- and medium-duty all-electric trucks and vans in advance of purchasing tens of thousands. The early and continuing uptake these vehicles has been predicated upon easy and low-cost access to charging infrastructure.

The success of new transportation and logistics technologies is closely tied to whether or not infrastructure that is plentiful and powerful enough to meet vehicle operators’ needs exists and is accessible. For the next waves of clean commercial vehicle deployments, existing infrastructure dynamics won’t meet the needs of many new technologies. Long haul and drayage trucks have significantly higher energy needs and will be traveling further away from their depots for days at a time. Accordingly, these vehicles will need dependable, fast, and plentiful fueling infrastructure along major transportation corridors to support their operations. Since supporting heavy-duty charging infrastructure will be spread across hundreds of miles, the development of this infrastructure will require thoughtful coordination between various stakeholders in different states, both private and public.

In the hopes of bridging this gap, CALSTART, in partnership with the West Coast Collaborative (WCC), has identified the needs, barriers and opportunities in creating the infrastructure to support an advanced technology commercial vehicle corridor along the West Coast. Through a series of working groups and survey outreach to fleets, government agencies, and fuel providers, CALSTART developed a replicable strategic plan to expand alternative fuel infrastructure in Oregon, Washington and California. The plan: 1) provides insight into deploying infrastructure to enable and catalyze near- or zero-emission travel and commerce across the entire West Coast and 2) evaluates the project readiness of the proposed sites from surveys and outreach.

Key findings from this plan include: 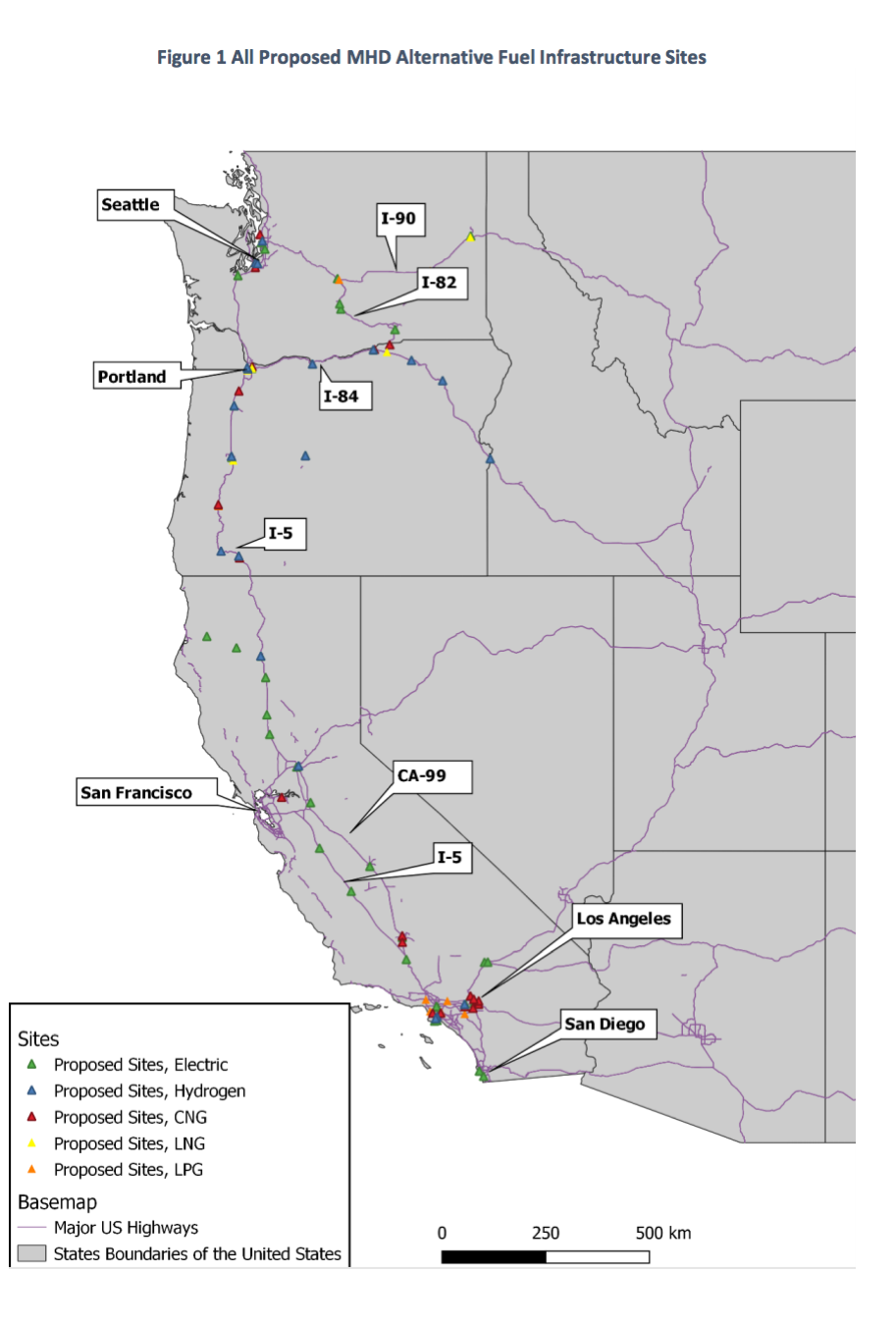 Given the strong appetite for near- and zero-emission infrastructure in California, Oregon and Washington, and the need for funding, the report recommends that AFICC partners and other stakeholders:

The results of the WCC AFICC stakeholder engagement emphasize the need for strategic planning and the potential to meaningfully coordinate research among interested and invested stakeholders to influence real-world outcomes. Though the outcomes of the AFICC process have not yet had time to take effect, the recommendations could provide a model for corridor-based infrastructure development that could be replicated throughout the United States and abroad.

To read about more about our process, our findings, and our recommendations, access the full plan here: https://westcoastcollaborative.org/files/sector-fuels/wcc-aficc-mhd-infrastructure-development-plan-2020-03-12.pdf For any questions about WCC AFICC or CALSTART’s broader infrastructure efforts, please contact cscott@casltart.org.

Campbell holds a Bachelor’s degree in Geology with a minor in Urban and Environmental Policy/Economics from Occidental College in Los Angeles, California.